YUGAS, AGES OF THE WORLD.

The world, the Earth, goes through two well-defined states, one is the state of uniqueness, the other is the dual state. In uniqueness there is no negative. In the duality there is the positive and the negative. 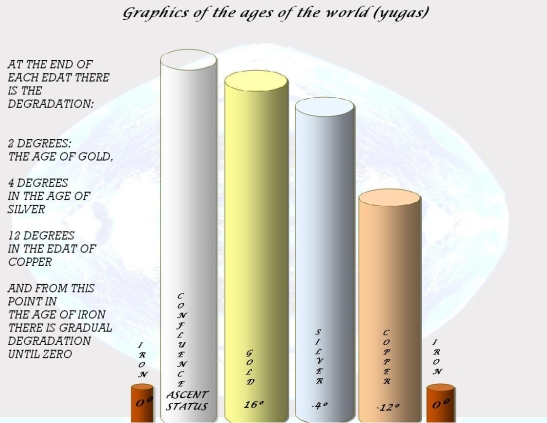 The iron age is now in its final moments; the age of the confluence is not a definite age, but, rather, a

vesica pisces on the ages of iron and gold, an superimposed that lasts approximately one hundred years, is the age of ascending, the time in which the human mind undertakes the flight, lightens itselves of the dense energy of the iron age, expands the limits or rather crosses them, leaves the inopia and becomes wise, and also becomes aware of the past, present and future as a cycle that is repeated; the golden age and all three other ages or yugas of the cycle, have a duration of 1250 years, making a total of 5000 years and then the world turns again and everything continues from the same starting point.

Now we are in Kaliyuga (iron age) in its finals. We are in the so-called “dark night of the human being”. This is the dark world where the duality that makes us suffer so much reigns. Here that’s why all we are afraid of being happy because, from our own experience, we know what later, unpleasant adversities will come, and also that phrase “there is no harms, that a hundred years to last” to calm the blow a little; Although this “blow” suffered by mankind has lasted almost 1,250 years, however, it is already ending. At least.., there is a general perception that something is moving at the level of vibration in humans. In fact it is an elevation of consciousness. It began in the surroundings of 1936 coinciding with the wars, the partition of India, etc., and we have been advancing in this period of 100 years called in the spiritual world: Confluence, the auspicious

vesic pisces. This shows that the 5000-year cycle, which ends with the iron age, is about eighteen years old to make the turn towards the uniqueness of the golden age, that is, Paradise, the day of the world.

This entry was posted on Octubre 4, 2019 by julianeus in PUNTS INTERESSANTS and tagged 5000 years, 5000 years cycle, AGES OF THE WORLD, dark night of the human being, dual state, duality, fear of being happy, kaliyuga, positive and negative, the age of confluence, the human mind sets off, the partition of India, uniqueness, vesica pisces, wars, yugas.